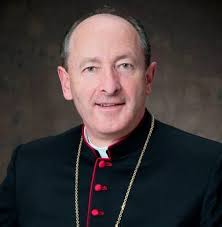 Bishop Cullinan was born in Lahinch, County Clare in 1959 to Christy and Rita and has four sisters and five brothers.  Bishop Cullinan is a priest of the diocese of Limerick.

His family moved to Limerick city where he attended the Salesians for early education, John F Kennedy National School and the Crescent College Comprehensive (SJ) for his secondary education.  From 1978-1981 he attended Mary Immaculate College of Education Limerick and qualified as a primary teacher (B.Ed) in 1981, and taught for six years in Castleconnell, County Limerick. He worked part-time during that time for four years with the Bunratty Castle Entertainers before going to Spain where he taught English for two years in a school in Valladolid.

Bishop Cullinan studied at Saint Patrick’s College Maynooth from 1989-1995 where he completed an STL (Licentiate in Theology).  He was ordained by Bishop Jeremiah Newman in 1994 in Saint John’s Cathedral, Limerick, and appointed Curate in Saint Munchin’s Parish Limerick city 1995-1996.  Bishop Cullinan’s next appointment was as chaplain to the Regional Hospital in Limerick from 1996 until 2001.  He studied for his doctorate in moral theology in the Alfonsianum in Rome 2001-2004 and was appointed chaplain to the Limerick Institute of Technology 2004-2011.   He was appointed Parish Priest of Rathkeale , County Limerick in 2011.

He was ordained Bishop of Waterford & Lismore on Sunday 12th April 2015. 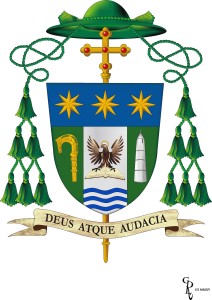 Interpretation of the Coat of Arms:
On the right side of the shield we find represented the ancient crozier of Lismore (circa AD 1100), Lismore monastery was founded in 635 by St. Mochuda.  Its site is now occupied by Lismore Castle.

In the centre an eagle resting on the Book of the Gospel, symbol of St. John the Evangelist to whom the Cathedral of Limerick, the diocese where Bishop Cullinan comes from, is dedicated.

On the left side of the shield, upon a green (vert) field is the round tower of Ardmore.

On the blue (azure) chief of the shield, we see three golden stars which represent the Holy Trinity to whom is dedicated the Cathedral of Waterford and Lismore.

“God and daring is a motto which has personal meaning for me.  We have no need to fear – God is with us.  In Philippians 4:13, St. Paul writes, ‘I can do all things through Christ who strengthens me’.  Either this is true or false.  It cannot be half true!” 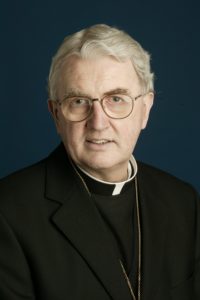 William Lee was born in Newport, Co. Tipperary, on December 2, 1941.  He received his early education at the Convent of Mercy National school, the Boy’s National school, Newport and later at Rockwell College, Cashel.  He studied for the priesthood at St. Patrick’s College, Maynooth and was ordained in 1966.

After ordination he studied Canon Law at St. Patrick’s College, Maynooth, and was awarded a Doctorate in Canon Law in 1969.

Later in 1969 he was appointed curate in the parish of Finglas West in the archdiocese of Dublin where he ministered for two years.

On his return from Dublin, he studied Canon Law for a short period at  the Gregorian University, Rome.

He was appointed President of St. Patrick’s College, Thurles in 1987.

He was ordained Bishop of Waterford and Lismore on 25th July 1993. 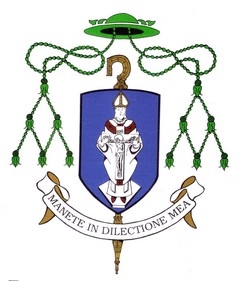 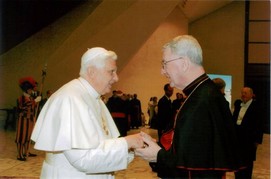 Waterford and Lismore Diocese has 45 parishes, 85 churches in the Diocese. There are an estimated 44,000 Catholic households in this diocese, with a population of 153,206.
© Waterford and Lismore Diocese - Hosted by GetOnline and supported by Aid to the Church in Need
We use cookies on our website to give you the most relevant experience by remembering your preferences and repeat visits. By clicking “Accept”, you consent to the use of ALL the cookies. However you may visit Cookie Settings to provide a controlled consent. Cookie Policy
Cookie settingsACCEPT
Privacy & Cookies Policy

Any cookies that may not be particularly necessary for the website to function and is used specifically to collect user personal data via analytics, ads, other embedded contents are termed as non-necessary cookies. It is mandatory to procure user consent prior to running these cookies on your website.

Analytical cookies are used to understand how visitors interact with the website. These cookies help provide information on metrics the number of visitors, bounce rate, traffic source, etc.

Performance cookies are used to understand and analyze the key performance indexes of the website which helps in delivering a better user experience for the visitors.

Undefined cookies are those that are being analyzed and have not been classified into a category as yet.

Advertisement cookies are used to provide visitors with relevant ads and marketing campaigns. These cookies track visitors across websites and collect information to provide customized ads.